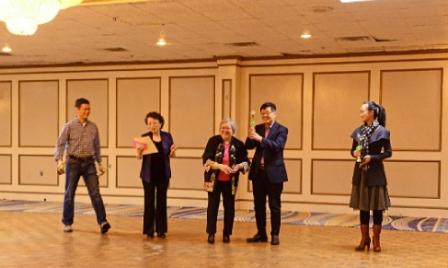 Board Member Virginia Ng was a VIP Judge and Host at the Award Night Gala. The Talent Competition and Music Art Festival culminated in trophy presentations prior to the Red Carpet Ceremony. Some OCA NJ board members happily walked the red carpet and were interviewed by budding young commentators.

Singing and acting performances highlighted the evening as the program progressed. One such skit was an audition for a TV host and improvised by the actors. Their antics must have surely been based upon real life experiences. Another segment was of parents commenting on their child’s progress and success. The consensus was that experiences proved very beneficial overall. Through many of the acting performances, there appeared an energetic young teen named Owen Wang. He is a veteran of a few commercials and has an agent. One could tell he had a bright future. Another noticeable participant was a young man named Gene Hong who played “Amazing Grace” on bagpipes. He relayed the story of how he plays this instrument in memory of his friend, Anthony Raspa. His friend was a NJ trooper who was a positive influence and always wanted to serve his community. He talked of his “burning desire” to play bagpipes starting in May 2016, after the death of his friend. Not an easy journey, Gene Hong found out. First, he waited two-three months for handmade bagpipes set which cost $1500. He spent one and a half years practicing and developing finger muscle memory. Then came the breathing process. His assessment was that this was going to be difficult, but he was encouraged by a band at Pipes and Drums of the Blue and Gold. He is keeping at it. An unusual choice in instrument but a memorable performance.

Remember the song Do, Re, Mi from the Sound of Music? A wonderful performance of this composition by Owen Wang, Alice Wu, Vivian Wang, Melinda Xu and Kathy Yang was delightfully received by the audience. Their enjoyment could be seen by their smiles and nods. The finale of the evening was the presentation of the Singing Category in which Platinum Winner, Olivia Gao, performed “Think of Me” from Phantom of the Opera. Gold winners of this category were Michelle Zhong and Amanda Chen. 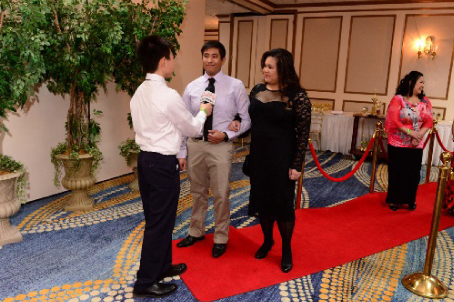